09.08. 2007 Business
“Green GDP” has been the new catchphrase in the Chinese media and politicaldiscourse in the past few years. China’s State Environment Protection Agency (SEPA) and the National Bureau of Statistics (NBS) jointly released China’s first Green GDP report in 2006, which measures the country’s GDP performance against the cost of resources and the impact on the environment. It concludes that a limited calculation of pollution alone cost 3.05 percent of China’s GDP in 2004 [1]. The widely reported new method of assessing China’s growth, however, will be relegated to simply an exciting start; Beijing recently announced that the much-anticipated Green GDP report for 2005, completed last year, would now be shelved indefinitely. 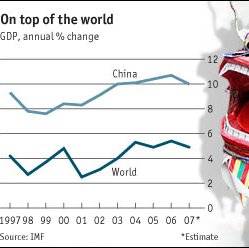 The announcement disappointed many who had believed that, with the new annual green indicators, China had embarked on a new path of development with a heavy emphasis on protecting the environment, maintaining a balanced ecosystem and conserving energy and resources. The effort by a number of Chinese government agencies is indeed ambitious. It was partly based on the United Nations Handbook of National Accounting: Integrated Environmental and Economic Accounting 2003, referred to as SEEA 2003, a system that “brings together economic and environmental information in a common framework to measure the contribution of the environment to the economy and the impact of the economy on the environment. It provides policy-makers with indicators and descriptive statistics to monitor these interactions as well as a database for strategic planning and policy analysis to identify more sustainable paths of development [2].” It is also an accounting method that no other country in the world has implemented. In the context of Chinese development experience, however, the new GDP indicators are a clear rejection of the old modernization model that exclusively focused on the growth rate of GDP. China desperately needs to confront the problems brought by its fast development—ranking first in the world in terms of economic growth rate, accumulation of foreign reserves and attracting foreign direct investment. Yet, China is also the largest consumer of the world’s construction materials, expending the most energy in unit GDP production and ranking first in air and water pollution with 70 percent of its rivers and 90 percent of its city rivers being polluted. Chinese cities treat less than 20 percent of its garbage, with 150 million tons of garbage disposed openly in the countryside. In addition, more than 300 million rural residents have no access to clean water and more than 400 million urban dwellers breath polluted air [3]. Thus, the newly established Green GDP measures, according to Pan Yu, Vice Minister of SEPA and the leader of the Green GDP Working Group, are designed to correct these problems. They deduct seven new elements from the annual GDP growth: depletion costs for mines, forests, land, water and wild life, plus losses from environmental pollution and damage to the ecosystem. Due to the lack of technical expertise, the calculation for the 2004 Green GDP report could only focus on one of the seven losses: environmental pollution. Yet, even for this category, the study covers only over one-half of the estimated damages because neither underground water nor soil pollution was included. Still, such a limited assessment came to more than 3 percent of the GDP for 2004, a rather astonishing but candid acknowledgement of the cost of China’s modernization program [4].

It seems logical that such progressive and future-oriented policy measures should redirect China’s development path to a more environment-friendly route. After all, President Hu Jintao and Premier Wen Jiabao have placed the “the concept of scientific development” at the center of their leadership, stressing harmony with the environment and equality of distribution. The National People’s Congress also passed pieces of legislation in the spring of last year, targeting a 20 percent reduction in energy intensity in the period from 2006-2010. Most of Beijing’s forward looking elites have come to realize that the world cannot support a China that consumes energy on par with the developed world on a per capita basis; that unrestrained industrialization will contribute greatly to global warming; that the ecosystem cannot sustain the same pattern of development China has undertaken in the past three decades; and that China cannot afford to wait and fix its environmental damage like most other industrialized states when its per capita income reaches about $8,000. They have also recognized that social stability is at stake. In 2005 alone, there were 51,000 civil disputes related to the environment, 400,000 environment-related complaints and appeals. These complaints are increasing at an annual rate of 30 percent [5]. Yet, the repeated delay in releasing the 2005 Green GDP report for the past months and its eventual halting have demonstrated the strong resistance to such a new approach to measuring development. First, there are debates regarding the scientific accuracy of the range of indicators and calculation methods. Some have openly questioned whether any country in the world could accurately assess the cost of resource depletion and environment damage in relation to GDP. In this regard, the original alliance of SEPA and NBS no longer exists. As Xie Fuzhan, the new head of the NBS, stated last month: “Since there is no truly internationally recognized green GDP standards, nor is there any country adapting such accounting methods, it is not possible to publish the data or make accurate calculations of the values involved [6].” Second, local opposition to such a report has been mounting. As indicated by the officials and researchers involved, the unpublished 2005 report includes data that is more damaging than the 2004 figures. More specifically, it contains green GDP indicators for individual provinces, a category that was not in the 2004 report. Based on these numbers, there are clear “winners” and “losers,” which served as the incentive for some of the provinces to officially appeal to both SEPA and NBS to withhold the data. The reason is very simple: if measured by green GDP standards, the entire annual growth rate for some provinces would be cancelled out if the cost for recovering the polluted environment is factored in, giving a zero annual growth rate [7]. Third, political calculations have taken priority over pressing environmental concerns. The Chinese Communist Party will meet for its 17th Party Congress this fall, and a torrent of bad news would make the Party leadership look bad. That multiple targets on energy conservation and pollution control set last year for the 11th Five Year Plan have not been met is also a disturbing reflection on the central government’s inability to implement its agenda. Furthermore, according to the Netherlands Environmental Assessment Agency, China has overtaken the United States as the largest emitter of CO2, and international pressure is mounting for Beijing to take more active measures on global warming [8]. While the Chinese government is fighting back on what it perceives to be a new brand of the China threat theory—China as a green threat to the world—any new domestic restrictions on environment may prove to be more of a self-imposed trap than what it is willing to take on at the moment.

Challenges Facing both China and the World

Therefore, it is overly optimistic for some international observers to speculate that China is about to embark on a new road, one that is totally committed to environmental protection and green growth [9]. It is also simplistic to conclude that the new battle line between reformers and conservatives is drawn at whether to accept the green GDP indicators. The reality is far more complex. While “red China” has certainly turned blue, it may take a while before it turns green. Yet, with all its limitations, incompleteness and setbacks, the green GDP as a new development concept seems to have great traction with the Chinese public. According to a survey of over 2,500 people by the China Youth Daily in late July, 96.4 percent of those polled agreed that China “needs to continue with the green GDP accounting.” Additionally, 78.9 percent of the respondents felt that the government must take more responsibilities on environmental issues, and 85.2 percent of those surveyed said that in the regions they live, it is common that the pursuit of GDP growth was done at the expense of the environment, while 79.6 percent regard the green GDP accounting method as helpful in changing the local governments’ “GDP only” performance mentality [10]. Internationally, the Chinese government officials and academics may become defensive if they feel that China is being singled out as the only environmental outlaw, and they may do so with good reason. Few Western countries, especially the United States, have a superior environment record that enables them to lecture the Chinese on either energy consumption or green house gas emission. Many of the Western world’s giant multinationals are producing in China, transferring their own pollution costs to China in the process and contributing to China’s growing environmental problems. For Western countries to continue benefiting from low cost Chinese exports, they will gain by working with China to tackle its growing green GDP needs. That is clearly a choice between win-win and loss-loss scenarios. Notes 1. The original report in Chinese is available online at: http://www.sepa.gov.cn/info/hbdxj/200612/W020061206587957039175.pdf. 2. Available online at: http://www.google.com/search?tab=nw&ie=UTF-8&q=seea%20united%20nations. 3. http://www.sepa.gov.cn/hjyw/200612/t20061220_97538.htm. 4. For more details, see “Huanbao zhongju, guojia tongjiju fabu luse GDP hesuan yanju chengguo,” http://www.sepa.gov.cn/xcjy/zwhb/200609/t20060907_92529.htm. 5. http://www.sepa.gov.cn/hjyw/200612/t20061220_97538.htm. 6. “Wang Jinnan: ‘Lüse GDP” shuju weihe bu gongkai,” Nanfang renwu zhoukan, July 31, 2007, http://news.sina.com.cn/c/2007-07-31/170713565533.shtml. 7. “Lüse GDP hecuan xiaozu: Youxie shengfen GDG shiji shi ling zengzhang,” Shanghai zhengjun bao, August 3, 2007, http://news.qq.com/a/20070803/002391.htm. 8. Netherlands Environmental Assessment Agency, June 21 2007. “Global fossil CO2 emissions for 2006.” Available online at: http://www.mnp.nl/en/dossiers/Climatechange/moreinfo/Chinanowno1inCO2emissionsUSAinsecondposition.html. 9. Lisa Buckley, “Green GDP – The Real Chinese Revolution?” The Globalist, September 23, 2004, http://www.theglobalist.com/StoryId.aspx?StoryId=4156. 10. “Mindiao xianshi: 96.4% de gongzhong zhichi jinxing lüse GDP hesuan,” Zhongguo Qingnian bao, July 30, 2007, http://sc.people.com.cn/news/HTML/2007/7/30/20070730101432.htm.
Source: Jamestown Foundation