11.03. 2007 Business
A new property law is a breakthrough, even though it raises hopes that one-party rule may dash 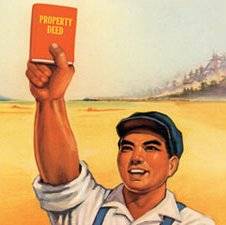 Some 2,500 years ago, one of Confucius's big ideas was the “rectification of names”. If only, he argued, sons would behave filially, fathers paternally, kings royally and subjects loyally, all would be well with the world. A faint echo of this thesis has been resounding this week in the cavernous auditorium of Beijing's Great Hall of the People, where nearly 3,000 delegates to China's parliament, the National People's Congress (NPC), have been enjoying their annual fortnight of wining, dining, snoozing and pressing the “yes” button. Living up to one's name poses something of a problem for the Chinese Communist Party, which dictates the laws the NPC will pass, and whose name in Chinese literally means “the public-property party”. To such a party it must be an ideological embarrassment that China has such a large and flourishing private sector, accounting for some two-thirds of GDP. So one law due to receive the NPC's rubber stamp this month, giving individuals the same legal protection for their property as the state, has proved unusually contentious. It was to be passed a year ago, but was delayed after howls of protest from leftists, who see it as among the final of many sell-outs of the ideas of Marx, Lenin and Mao Zedong, to which the party pretends fealty. The party's decision to enact the law in spite of that resistance is a great symbolic victory for economic reform and the rule of law. Clearer, enforceable property rights are essential if China's fantastic 30-year boom is to continue and if the tensions it has generated are to be managed without widespread violence. Every month sees thousands of protests across China by poor farmers outraged at the expropriation of their land for piffling or no compensation. As in previous years, placating those left behind in China's rush for growth has been a main theme of the NPC (see article). In the cities, and of greater importance to the decision-makers pushing the law through, a growing middle class with its wealth tied up in houses wants to pass these assets on to their only children. These people are anxious about the security of their property and, like their fellows in the countryside, are becoming more assertive. In other countries the emergence of this group as an important political constituency has been followed by an unstoppable drift towards greater pluralism.

A journey of a thousand steps

In the short term, however, do not expect too much. The latest law is only one step in the slow trudge China is making out of the blind alley of Maoism. One big change in 2002 allowed businessmen to join the Communist Party, thus turning the revolutionary vanguard into a networking opportunity for bosses. In 2004 China changed the country's constitution to enshrine private-property rights. But the constitution is less a prescriptive document than a constantly changing description of what has just happened. So nothing changed. This latest law, likewise, will not bring the full property-rights revolution China's development demands. Indeed, it will not meet the most crying need: to give peasants marketable ownership rights to the land they farm. If they could sell their land, tens of millions of underemployed farmers might find productive work. Those who stay on the farm could acquire bigger land holdings and use them more efficiently. Nor will the new law let peasants use their land as security on which they could borrow and invest to boost productivity. Nor, even now, will they be free from the threat of expropriation, another disincentive to investment. Much good land has already been grabbed, and the new law will merely protect the grabbers' gains. This law cannot in itself resolve the murkiest question: who owns what? This is especially true in the countryside, where the mass collectivisation during Mao's Great Leap Forward of half a century ago left farmland “collectively” owned. Peasants have since been granted short (30-year) leases. But even outside agriculture it is often unclear whether a “private” enterprise is really owned by individuals or by a local government or party unit. Conversely, some “collective” or “state” enterprises operate in ways indistinguishable from the private interests of their bosses. Moreover, should an underdog try to use the new law to enforce his rights, the corrupt and pliant judiciary would usually ensure he was wasting his time. Since the Cultural Revolution, when the NPC passed just one law between 1967 and 1976, the legislature has been legislating quite prolifically. But the passage of laws is not the rule of law. Which leads to a final obstacle: without an accountable executive branch, the necessary reform of the legal system is not going to happen. As the passage of the property law itself demonstrates, the party is showing itself somewhat more responsive to public opinion than it was in the past. But it still runs a government that does its best to silence most dissenting voices, strictly controls the press, and lavishes resources on the best cyber-censorship money can buy. Property rights are a start; but only contested politics and relatively open media can ensure that they are enforceable.

Petty-bourgeois fanaticism can be good for you

No revolution today then. Yet in the long term the leftist opponents of China's property law are surely right to be worried about what has been begun this month. They understand the law will entrench the rights of the carpet-baggers who have looted the state as it has privatised assets. They also understand that the law, for all its technicalities, does not chime with an avowedly communist government. The leftists derive their theory not from Confucius, but from Marx. Were the latter writing today, he would surely see in China a revolution waiting to happen—or perhaps two. One is the bourgeois revolution led by the emerging property-owning middle class that the new law will help. The other is the potential for the simmering resentment in the countryside to boil over, perhaps in frustration at the law's shortcomings. Property rights are at the root of both—which is why the dozing NPC delegates may have started a process this month that will one day change their country completely.
Sorce:The Economist