From www.cinsky.cz - Politics - 2006-12-12
Russia and China are getting along better than ever—for now 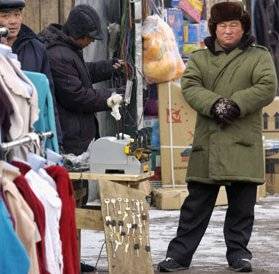 TWO years ago, Irina Abdulova, a sociologist in the Siberian city of Irkutsk, noticed a change. The town's racist graffiti had until then been directed mostly at Caucasians, reviled all over Russia. But in 2004 it found a new target: the Chinese.

One can see why bigots in search of bogeymen found China so promising. Since the Soviet collapse, the population of Siberia and Russia's vast Far East region has fallen even faster than that of the country as a whole. In the Far East, it has tumbled from around 8m in 1991 to around 6.5m today, while a total of 107m people live in three neighbouring provinces of China. As Russian numbers sag, and as Chinese traders and labourers become more visible in Russian cities, fearful talk of the “yellow peril” has flourished. The Chinese are said to be swarming across the Amur river to carry off raw materials and women.

Yet at the same time, much of Siberia's population is clad in cheap Chinese-made apparel and fed by traders from China. Businesses crave Chinese workers, for want of sober indigenous ones. In Siberian towns like Zabaikalsk (pictured above), Chinese street markets have brought a dash of colour and cheap goods. So even as they mutter racist slogans, members of Siberia's Lumpenproletariat benefit from proximity to the dragon.

There is a similar tension in the broader relationship between the world's former superpower and its rising one. The Soviet Union and China had their own cold war, which fully thawed after Mikhail Gorbachev visited Beijing in 1989. Now, says Alexander Lukin, of the Moscow State Institute of International Relations, relations between the two states are at an all-time high. A dispute over the border (one of the world's longest, and the cause of a war in 1969) was settled in 2004. More visibly, the two countries last year staged their first joint war games, involving around 10,000 troops. Given China's disdain for military alliances (it technically has one with North Korea, dating from 1961, which it would rather forget), staging the manoeuvres on Chinese soil was a big gesture.

Russia and China drew closer during NATO's air wars in the Balkans, which they both opposed. Since then they have made common cause against what both see as the risk of American “hegemony”. Both also see the United Nations Security Council, where they have permanent seats, as their best arena. After September 2001, both were alarmed by America's new military presence in Central Asia (the Shanghai Co-operation Organisation, a regional grouping that they dominate, last year asked the Americans to set a date for their withdrawal). Both, too, resent foreign criticism of their domestic human-rights records, and outside meddling in what they see as illegitimate separatism in Chechnya and Taiwan. Solidarity on that issue was one message of the war games: though their stated purpose was to restore order in an imaginary country riven by ethnic fighting, they looked very much like a rehearsal for invading Taiwan.

The mutual attraction reflects positive factors too. China has long been the biggest buyer of Russian arms (the exercises were also an arms fair). Increasingly dependent on imported oil and gas, it wants to be a big buyer of Russian energy. Three new pipelines—two for gas, and one to bring Siberian oil to the border—are promised by Russia; and high prices have made it viable to deliver Russian oil by train.

Shi Yinhong, of Renmin University in Beijing, argues that ties with America are still more important to China than those with Russia. For China, the two relationships get in each other's way. For example, Russia participates in the six-way talks on North Korea; but China would prefer to monopolise diplomacy in that area, parlaying its supposedly close ties with Pyongyang into leverage with the Americans over Taiwan. Still, as Dmitri Trenin of the Carnegie Moscow Centre says, the Russia-China pairing is no longer merely a sort of diplomatic adultery, used by both to irk America: it has “a dynamic of its own”.

If America is relatively unperturbed by the Russian-Chinese dalliance, that may be because it sees it as fragile. Though geography and economics make the two countries natural partners, the distribution of land, people and resources also makes them rivals. Indeed, the interests now drawing them together contain the seeds of future competition, even conflict.

Take bilateral trade. It is booming, to around $30 billion last year. But it is still paltry compared with China's trade with America, and in important ways is disappointing for both sides. The Russians are peeved that China buys little Russian machinery and few manufactured goods. The Chinese, meanwhile, are grateful for the Russian weaponry, from fighter planes to submarines, that has helped modernise their armed forces. But it rankles that the Russians withhold some of their most advanced weapons, even as they sell them to India, which China still eyes with distinct suspicion.

The match between Russia's vast hydrocarbon reserves and soaring Chinese energy needs is fraught too. The Russians use the threat of redirecting oil and gas supplies eastward to pressurise their European customers. But prevarication over the construction of new pipelines has both undermined those threats and exasperated the Chinese. Russia has for years been tantalising both China and Japan with a possible pipeline to carry Siberian oil either to China or to the Pacific: a game designed to extract concessions (such as a Chinese promise to buy Russian nuclear technology) that has left both Asian states bitter. The oil pipeline plans are still murky; the gas schemes even sketchier.

Shared devotion to “multipolarity” in world affairs offers only a temporary bond. When China emerges as an undisputed pole in its own right, Russia will likely seek new partners to counterbalance Chinese power. Joint worries about America's role in Central Asia mask an underlying rivalry for influence and resources.

How these latent tensions are resolved will depend on political developments in both countries, and on how nationalistic each becomes. For Russian nationalists, China is both a threat and a solution to the problem of American power. But the equilibrium of fears may not last.

Any souring of relations will probably be felt first in Siberia and the Far East. It is striking that, in Irkutsk and elsewhere, fretful Russians always say the really big Chinese communities are somewhere else. But nobody can agree on where—in fact nobody knows how many Chinese there are in Russia. Though some Chinese settle, most are temporary visitors. Talk of the “yellow peril” is as old as it is irrational: Tsarist-era Vladivostok had a special police department to deal with the Chinese population. (Equally old is Russian awe of Chinese workers: a 19th-century writer said admiringly that they “don't drink, work one day after another, don't demand much, and are obedient.”)

Already, Russian politicians exploit the “yellow peril” fear. New federal rules limiting the role of non-Russians in retail markets, aimed at Caucasians in European Russia, will hit Chinese markets in the Far East too. But outsiders should not take heart: if warm Sino-Russian relations raise eyebrows in some quarters, a big falling out could be far be more troubling.