From www.cinsky.cz - Politics - 2006-09-30
The harder they fall...Hu Jintao sticks out his elbows and fires Shanghai's party chief. What the firing of Shanghai's party boss says about China. 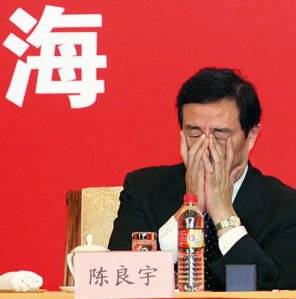 POWER struggles in China these days tend not to be as vicious as they were under the rule of Mao Zedong, but the dismissal on September 24th of Shanghai's Communist Party chief, Chen Liangyu, was still redolent of that former time. Photographs of Mr Chen were removed from official websites. So too were his speeches and interviews. Mr Chen's musings on building Shanghai into a “socialist modern international economic centre” mercifully disappeared with them.

Rumours had long been swirling that Mr Chen was in trouble. The arrest in August of Qin Yu, a district chief in Shanghai and a former senior aide to Mr Chen, suggested that the noose was tightening. Mr Qin (who is also a translator of Jean-Paul Sartre) was accused of involvement in the misappropriation of $400m of the city's social-security funds. Now investigators say Mr Chen himself played an unspecified part in the scandal. He is also accused of “seeking benefits for a number of unlawful enterprise owners”, protecting lawbreaking aides and seeking illegitimate gains for his relatives. The government's news agency, Xinhua, said this had created a “vicious political impact”. Several Shanghai officials as well as business leaders are being investigated.

Mr Chen is the most senior party leader to be accused formally of wrongdoing since Beijing's party chief, Chen Xitong (no relation), was forced from office in 1995 and later jailed on corruption charges. In both cases, struggles among top leaders appear to have played an important role. Shanghai's Mr Chen, who studied at Birmingham University in England for a few months in 1992, was appointed as party leader and a member of the Politburo ten years later, at the same time as Hu Jintao became the party's general secretary. Mr Chen clearly owed his rise to the patronage of Mr Hu's predecessor, Jiang Zemin. This made him vulnerable.

But whereas Chen Xitong was a political giant who was seen at the time by Mr Jiang as a direct challenge to his power, there is little sign that Mr Hu's leadership has been seriously threatened by Chen Liangyu. It appears more likely that Mr Hu has moved against Mr Chen in order to demonstrate his resolve in the face of a more general threat: that of provincial and lower level leaders blithely ignoring the central government's efforts to tame the economy. With the help of compliant local banks, many are investing in lavish new projects and encouraging speculation in real estate. The central government fears this is creating bubbles in the property market that could threaten social and financial stability.

The timing of Mr Chen's fall is important too. The party has just announced that its Central Committee will hold its annual session from October 8th to 11th. A key theme will be how to establish a “harmonious society”. This principally means how to curb an upsurge of protests around the country, fuelled by corruption. During the meeting, Mr Chen is likely to be expelled from the Politburo (his duties have already been “suspended”). By targeting Mr Chen, Mr Hu is, as the Chinese put it, “killing the chicken to scare the monkeys”. In the buildup to a five-yearly party congress due to take place in late 2007, many local officials will end their terms. Mr Hu wants them replaced with loyalists. In Shanghai, the city's mayor, Han Zheng, has taken over as acting party chief, but it is likely that Mr Hu will send one of his protégés to fill the post.

At the central level, there is little sign of any concerted challenge to Mr Hu. Observers of Chinese politics often refer to a “Shanghai gang” of politicians who came to power thanks to their association with Mr Jiang when he was the city's party chief in the 1980s. But Mr Jiang's influence has ebbed considerably since he gave up his last position, as military chief, in 2004. He has kept quiet on state affairs. China's vice-president, Zeng Qinghong, at one time considered a Jiang loyalist, has shown no obvious sign of resistance to Mr Hu. Another Jiang ally in the Politburo's nine-member standing committee, Huang Ju (a former Shanghai party chief), has been ill with cancer for the past several months.

Mr Hu's problem with local governments is largely one of the party's own making. The party decrees that maintaining social stability is of paramount importance. To local officials this means keeping growth rates high, regardless of any damage to the environment or buildup of bad loans in the banking system. When they hear the central leadership call for more rational growth, they reckon that ignoring the centre is less politically risky than the potential consequences of an economic slowdown, which could exacerbate unemployment and thus social tensions.

For all Mr Hu's resolve in dealing with Mr Chen, he and his prime minister, Wen Jiabao, sometimes appear to lack determination when it comes to steering the economy. Unlike his predecessor, Zhu Rongji, who took considerable political risks to steer China into the World Trade Organisation in 2001, Mr Wen has made more concessions to a groundswell of economic nationalism. It is unclear whether he will heed an outcry from abroad over new regulations issued this month by Xinhua aimed at tightening its control over the distribution of news services in China by foreign agencies. This has been viewed as an effort by Xinhua to displace foreign companies such as Reuters and Bloomberg, which dominate the provision of financial news and information to Chinese banks and brokerages.

The shake-up in Shanghai might at least prompt new thinking about the chaotic management of China's social-security funds. These (apart from a centrally managed reserve fund) are currently in the hands of local officials who have a tendency to invest them rashly or to pocket them. The illicit flow of this money into real-estate ventures gives local governments all the more incentive to pump up property prices. Shanghai Daily, a state-run English-language newspaper, quoted an official as saying that from next year the funds might be supervised centrally and entrusted to “independent fund managers”. That is long overdue.

The harder they fall...

ABROAD, China likes to portray itself as a responsible power to be reckoned with. But at home its Communist Party is still a law unto itself. As Shanghai's once-powerful party boss, Chen Liangyu, is now experiencing for himself, party investigators have the power to detain members suspected of wrongdoing indefinitely, with no access to lawyers. The party will decide whether to forgive any sins that have been committed, or hand over the accused to the police. The verdict will be reached in utter secrecy.

Such is the spine-chilling world in which Mr Chen, until last week in charge of China's showcase of modernity, now finds himself (see article). He is accused of involvement in the misuse of $400m of Shanghai's pension fund, of helping relatives in criminal ventures and of covering up law-breaking by aides. But his political demise is about more than alleged sleaze. In power struggles at the top of the Chinese leadership, charges of corruption are often a convenient weapon. Meanwhile, corruption is made worse by the party's handling of China's fast-changing economy.

Getting the wrong sort of grip

President Hu Jintao is fighting to impose his authority on wayward localities which are defying efforts to rein in economic growth and prevent a frenzy of ill-considered investment that could further cripple the banking system with bad loans. Before a five yearly party congress late next year, Mr Hu also wants to install loyalists in key posts in the provinces. Mr Chen owed his job in Shanghai to Mr Hu's predecessor, Jiang Zemin, making him an obvious target. He is also widely rumoured to have attacked Mr Hu's economic-control measures at a meeting of the ruling Politburo two years ago.

By taking on Mr Chen—the first Politburo member to be dismissed in more than decade—Mr Hu is flexing his muscles. But he is also showing how little the party has changed. When he first came to power in 2002, he seemed to signal that he would make the party more open and subject to the rule of law. Instead, its investigations are still driven by politics. Corruption is just as rife. The 200-member Central Committee is supposed to monitor the work of the 24-member Politburo headed by Mr Hu, but at its annual meeting next month it will rubber-stamp whatever is put before it.

Mr Hu's difficulties in taming the economy—it grew by 11.3% year-on-year from April to June, its fastest quarterly rate in more than a decade—show how far the party has yet to go in embracing market mechanisms. It far prefers to manage by administrative fiat—issuing orders to clamp down on this or that type of investment—rather than allow interest or exchange rates to do the job. That encourages local officials to beg for special favours. More than 5,000 localities from provincial down to county level have opened offices in Beijing in recent years, spending some $2.5 billion annually on lobbying, according to China's media—and fuelling corruption.

Shanghai has prospered on Mr Chen's watch. He helped it win the right to host the World Expo in 2010. But Shanghai's citizens will not mourn his fall. There is deep cynicism in Shanghai and the rest of China about the probity of party officials. There is also great scepticism that the party can do anything about it. By lashing out at Mr Chen, while resolutely eschewing a free press, an independent judiciary and competitive elections, Mr Hu does nothing to reassure.